I’m dropping this here because I get this question all the time. Most recently via Twitter, where I don’t have the space to properly answer. So, if you’re coming to NYC and have time to eat at only one pizzeria, here’s a good list to choose from. My frame of mind for this was, “What if I moved away from NYC? Which pizzerias would I ABSOLUTELY CRAVE?”

Motorino: My favorite wood-fired-oven pizzeria in NYC. Get anything but the Margherita, which ends up being quite boring compared to their other pies. (Although I’m not a huge fan of the Colatura pie. Not because it’s probably not good, just because I’m not a huge anchovy fan.)

John’s of Bleecker: The one on Bleecker. The others are owned by a different part of the family and aren’t as good. It’s workmanlike pizza. Won’t blow your doors off compared to some of the others on this list, but when I’m in the right mood I love it.

Best Pizza: Great all around, but the grandma pies are excellent. They have killer sandwiches, too. Get an Italian combo to go and eat it later.

Adrienne’s Pizzabar: possibly my favorite grandma pie in NYC. It’s called the “old fashioned” or some such. Don’t even bother ordering the round pie here.

Patsy’s in East Harlem: And only the one in East Harlem. Like John’s, someone else owns the others, while the original remains within the same line of folks tracing back to Patsy Lancieri. One of the few coal-oven joints that offers both fresh and regular mozzarella. I prefer the regular mozzarella. It’s also one of only two coal-oven places to offer pizza by the slice. It’s a good deal, but get a whole pie. For some reason, I think they do the whole, made-to-order pies better than the slicing pies. (They seem to put too much cheese on the slice pies.)

Louie & Ernie’s: A solid pizza all around, but I CRAVE their sausage pizza. Sausage and onion, even better. GREAT sausage here. Yes, you can get it by the slice, but you really have to order a whole sausage pie. A slice with sausage, he just puts the sausage on after the fact and then gives it a reheat. Then the chunks fall off because they’re not melted into the cheese. Oh, this one is in The Bronx, by the way. Pretty far by train, and then a bit of a walk from the train to boot.

Paulie Gee’s: Inventive and inspired topping combos and a great atmosphere. I love the Greenpointer, the Grapeful Dead, and the Cherry Jones. You do yourself a disservice if you order the Regina here (Paulie’s equivalent of the Margherita).

Note: I did this list in, like, 5 minutes. Maybe I’ll go back and add contact info/addresses. Maybe I won’t. You do know how to google, don’t you? 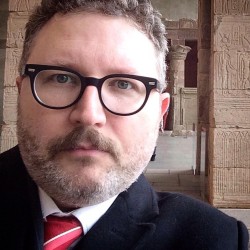 Adam Kuban
Adam Kuban is the web's original pizza blogger, blabbing about pizza online since 2003. He's the proprietor of the occasional bar-pizza pop-up Margot's Pizza and is active on Instagram: @akuban & @spinningpizzathing.

We use cookies to ensure that we give you the best experience on our website. If you continue to use this site we will assume that you are happy with it.Accept & Proceed